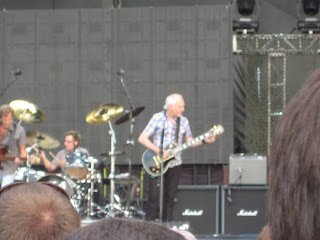 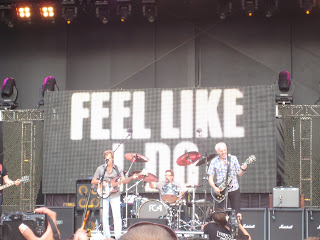 Jason Mraz and Robert Francis played a great show on October 5th at a less than full Scotiabank Theatre configuration.

Mraz is finishing off his "pre-album" tour, consisting of visiting places he hasn't been to in the past several years. The last time he played Ottawa, it was in support of his second album (Mr. A-Z) and he played the old Capital City Music Hall downtown.

This time, he brought the the Grooveline Horns band, part of whom he toured with on his last tour in support of album "We Sing, We Dance, We Steal Things".

The show was a wonderful mix of new and old songs and a stage complete with a recycled bottle light show. While "I'm Yours" was the obvious crowd pleaser (kept until the very end), Mraz's new numbers show a variety of his traditional style ("This is what our love looks like") and tongue-in-cheekness ("Mama Say").

Opening with "A Way to Remember Me" on piano, the show moved onto "Up", a new tune that reminds one of "Live High" from his previous album. A reggae version of his first hit "The Remedy" had the band appear on the second level in the arena. 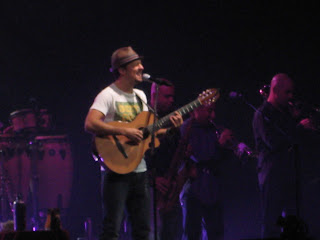 After "Make It Mine", a new tune "Gentleman (Don't Change At All)", Mraz got the entire crowd playing duet on "Lucky".

The encore featured a band instrumental ("Freakshow"), a brand new un-named tune and then a funky cover of the Beatles' "All You Need Is Love".

Whoever was behind the sound board certainly didn't have their Wheaties. The opening numbers had a "buzz" and several clicks. Thankfully, it was fixed in the end.

Why Ottawa doesn't seem to have heard about Jason Mraz, I have no idea. Radio here seems to ignore him as do the papers - while the Citizen featured a phone interview, they didn't actually review the concert.  They are missing out - and it seems to be a continuing phase the city is going through.

I noted earlier that Katie Melua was playing the Bronson Theatre. The Bronson Theatre isn't a place I've heard of a lot - now I know why (it's the former Immaculata High School). But they've got some great names coming there this fall, including comedy, Ani DeFranco and Broken Social Scene.
Another reason for bringing these shows up are a great trend in ticket pricing. These shows are priced around $30 and the shows will be quite intimate (1000 people tops).
Compare that price to Roger Waters ($55 for limited view but up to $200 for good seats) or even Johnny Reid ($60 for good seats).
I remember basic prices for shows being close to $75 or $80 for basic tickets (the 2008 Police show was at $225 a seat).
Another good deal? Jason Mraz at $45 - all tickets at Scotiabank Place (Theatre seating - so max 2500).
At these prices, these shows come dangerously close to "cover" prices for local bands at some clubs. I recall seeing Stoned Soul Picnic at some local places with a cover of $10.
What are some of the best deals for shows you've been to lately?
Posted by Andrew MacNeill at 9/06/2010 10:28:00 AM No comments:

Update: This concert was cancelled due to illness
Amazing the different types of places artists can play in Ottawa these days.
Katie Melua Ottawa - Katie Melua at Centre Bronson | Eventful

Katie Melua, who is one of the UK's biggest female stars in the past few years, is playing Ottawa at the Bronson Center Theatre on Wednesday, September 9th.
If you haven't heard her music before, it's acoustic but with a tinge of Kate Bush. She also does a pretty cool Cure cover.
Tickets are only $30, definitely a great deal for such an intimate location.
Posted by Andrew MacNeill at 9/06/2010 10:21:00 AM No comments:

Live 88.5's Big Money Shot is a great way to check out the latest music artists around the Ottawa area. Are you in the hunt?

If so, drop us a line , giving us the details. The Live 88.5 site isn't the best for finding out upcoming details just the past event.

If you're a local band or artist in the Ottawa area, please post a comment or send a direct email  and we'll get in touch with you on how you can promote your music and shows on Ottawa Rocks!
Posted by Andrew MacNeill at 8/08/2010 10:19:00 AM No comments: